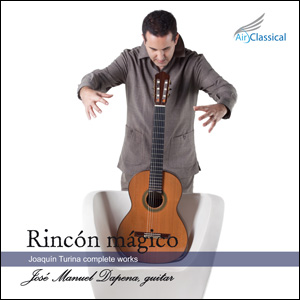 You have to appreciate the new generation of guitarist who take the initiative to manufacture their own albums instead of waiting for a A&R rep to bless their efforts with a recording contract because generally, this rarely happens anyway - unless an artist happens to win a contract through a competition or else land a bulldog manager who can procure a spark from twizzling sticks against flint and from snapping at the heels of various labels while papering their client´s face all over town á la the graffiti artist Banksy.

Spanish guitarist José Manuel Dapena has formed his own label, Air Classical, which issues music via downloadable mp3s.
Dapena´s newest release, Rincón Mágico, features his performance of the Joaquín Turina´s entire body of original manuscripts. Given that the now-defunt Tower Records in New York was never open or accessible 24 hours the way the online web is, the idea of a click-to-pay and download album has it appeal, even it it´s lacking the shiny tactile magpie charm that a physical CD offers. Just think - seriously, where are you going to stuff another CD on your shelf anyway?. A quick google search of this album title and artist shows that the album is available online for download from various number of popular music sites, including iTunes and Amazon.

Dapena, a student of David Russell´s, also studied harmony with Turina´s grandson, José Luis Turina and he actively correspond with Alfredo Morán of the Turina archives, when working on these pieces, which showcase Turina´s contemporary, modernistic interpretation of traditional Spanish music.

This music download compilation represents a significant body of work, not just for Dapena´s masterful playing but for the ambitious scholarly effort put into restoring these pieces to their original, non-Segovia form